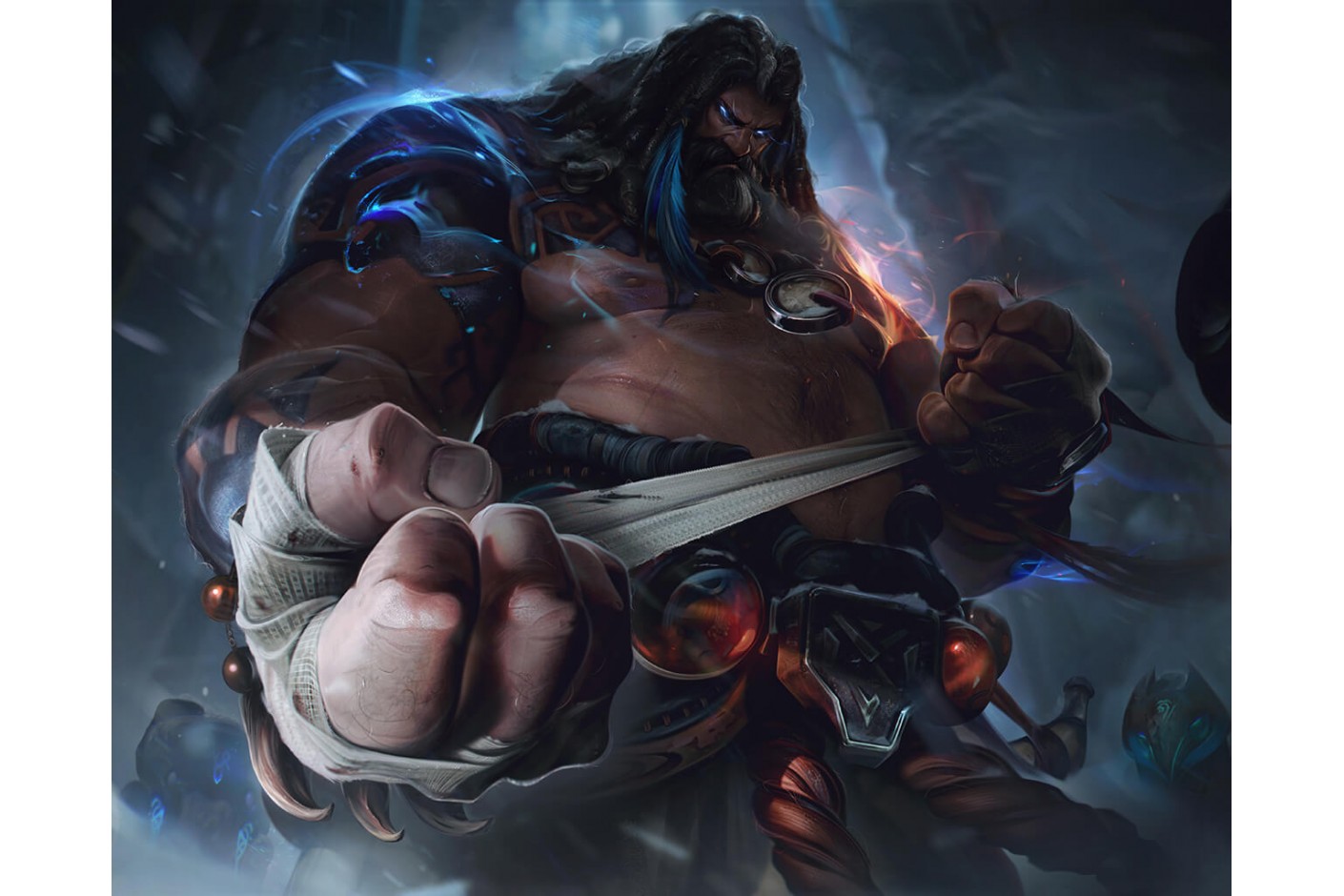 The Earth Spirit is beginning to collapse from the inside out. Udyr believes this is the reason for the Avarosans, who are trying to unite with the Freljord, but are causing pain. He detailed everything with the other walkers, and begged them to join Winter's Claw in blocking the Avarosa's footsteps. Many were skeptical, but others, apprehensive about what Udyr said were true, agreed.

Armed with his newly awakened powers, Udyr hurried back to the Winter's Claw tribe, intent on preventing a crisis that could utterly destroy the Freljord.

As the most powerful beast walker alive, Udyr is able to communicate with all spirits in the Freljord. He can sense their desires, and he can channel their transcendent powers into his wild battles. Udyr seeks inner balance so that his will is not lost in the tumult of spirits, but he is also seeking outer balance, for the mystical land of the Freljord must rely on strife and conflict to get nourishment. Udyr knew all too well that sacrifice was inevitable in order to prevent the Freljord from stagnant, seemingly peaceful.

Beast Awakening: Udyr has four basic skills, each of which switches his stance. He can activate the current stance again every once in a while to get the awakening effect. Each stance shares the cooldown of this effect.

Monk Practice: Whenever Udyr switches stance or enters Awakening, his next two attacks will gain bonus attack speed and refund part of the cooldown of Beast Spirit Awakening.

Awakening: Udyr further increases his attack speed, and his next two attacks will channel Lightning to jump between targets, up to 6 times. Lightning can strike the same target multiple times, so it can deal massive damage to a single target.

Udyr gains a shield and heals his next two attacks.

Awakening: Udyr increases the shield value gained, restores more health on his next two attacks, and regenerates a percentage of his maximum health for the next few seconds.

Udyr gains an explosive movement speed boost. In this stance, his first attack on the target will leap a short distance and cause a stun effect (independent cooldown for each target).

Udyr calls a storm around him, damaging and slowing nearby enemies. The next two attacks cause a Storm Pulse, dealing bonus magic damage.

Awakened: Udyr unleashes a storm, causing it to deal additional damage and chase nearby enemies.

The spirits hear my prayers and give me to fight. give me growth.

My power comes from the beast spirits in my body, they are not really me, but they obey me.

Sejuani's wild boar, her real ice, her clan, her mission... all I want to protect.

The path of practice is like a volcano, and I am the rolling lava in it.

For years, I felt like I was cursed. I'm still not sure.

Spirits, why? Why did you choose to put me through these fights? Will there be an end?

At the beginning of the game, Udyr can rely on GANK to quickly help Katarina open up the situation. After having enough equipment, Carter hopes to have a stable front-line teammate to help him keep people and start a team, and Udyr can just create a team battle. Chaos, this is what Carter wants most, after the first round of damage, Udyr can help Katarina keep the rest of the people, and Katarina can also use ACE to repay Udyr's full help

Udyr lacks sustained high damage, but can provide the team with excellent tankiness and stable control. These two just make up for the flaws of Nuo Shou, and at the same time Nuo Shou can just stack up with blood rage at the end of Udyr's R form, and start the harvest mode. The two complement each other well, both in the early rhythm and in the mid-game, they are very powerful.